As Simon points out, accidental errors are bound to occur in organizations large or small. Of course, there is also the possibility of intentional manipulations. Aside from skewed data, even elements that seem simple can dramatically affect the perception of a dataviz. Such items include:

Simon urges Visual Organizations to always be skeptical of dataviz. Additionally, being mindful of dataviz best practices that can help you spot potentially biased or incomplete data visualizations.

Below, we’ve included a common way skeptical dataviz users look at a visualization:

This example shows the same chart using three different scales. In the past, we’ve blogged about objectivity in scales. Without altering the data points, improper scales can manipulate the story being told. To avoid this, experts recommend:

We all know the phrase “assuming makes an….” (we’ll let you finish the rest). This principle applies to dataviz as well. Simon wisely reminds Visual Organizations they should not make broad assumptions about their audience or apply a “one-size-fits-all” approach to dataviz.

Be mindful of who will use the dataviz you’re developing. Creating a visualization for the sales team? It should probably look different than the one you make for data scientists. Build your dataviz with the audience’s skill level and needs in mind.

In addition, you may consider including directions with your data visualization. We can’t always control the audience for our dataviz projects, but a good rule of thumb is:

Here is an example of mindfulness of audience in dataviz from Scientific American: 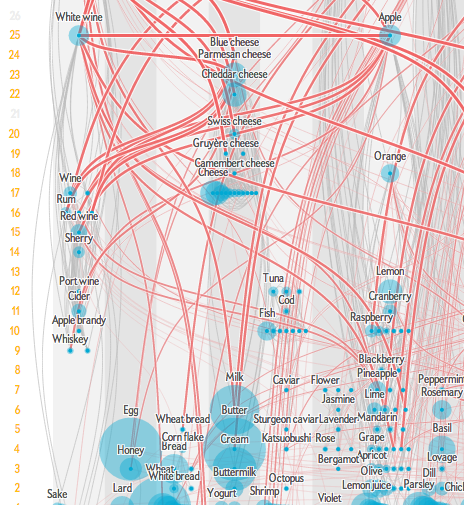 Looks super complicated, right? However, when you load the visualization, they offer an array of help.

Help includes an overlay with visual direction and a help button if you get lost later on.

Let it breathe! Simon put it best when he wrote, “trying to cram too much information into a single dataviz is unlikely to convey meaning, much less the right meaning.”  On the other hand, creating a dataviz with an appropriate amount of data in tiny space is equally ineffective and frustrating to users. Plus, it can make you seem less credible and believable.

One way to to determine if you’re putting in too much information is to make a list of the most important points you are trying to convey. Sometimes, writing them down helps you realize that you have more than what you truly need in a dataviz.

Once again, be mindful of your audience. Will they be accessing it from mobile or desktop? Leave enough space to make trends obvious and interactive features accessible and helpful. If there’s too much data for one visualization, you can always break it up with drilldown!

The inclusion of chart drilldown also helps build credibility. It shows users that you are not cherry picking a data set. Rather, you are trusting them to evaluate the entire package with their own discretion.

Use this in YOUR Visual Organization

By following the best practices and avoiding the mistakes Simon has outlined in The Visual Organization, you can ensure that your organization is creating accurate and effective data visualizations. We highly recommend reading the book in its entirety, as there are many more helpful details and some fantastic case studies.